As Part of a busy 2020 calendar of fundraising events for the Bri-Stor Group, a team of cyclists from Alpha Manufacturing and Bri-Stor Systems will be taking part in a Coast to Coast Challenge.

The event, scheduled for September, will see the group travel up from Stafford to Siloth on the East Coast near Carlisle, where they will set off on a 125 mile journey along Hadrian’s wall all the way to Tynemouth on the West Coast.

The ride is planned over two days, with a stop off over night along the route. A support group of Bri-Stor Group employees will also follow in a Bri-Stor Systems Welfare vehicle and will be on hand to supply refreshments and support throughout.

The event is open to all levels of experience and experienced cyclists and novices alike have already signed up to take part.

As with all Bri-Stor Group fundraising events this year, all proceeds will be donated to the nearby Katharine House Hospice, who offer crucial care and support for people with advanced life-limited conditions across mid-Staffordshire.

If you’d support the Coast to Coast event, visit the just giving page and click donate.

Gemma Takes on UNI Challenge in Aid of Katherine House

Gemma has been studying manufacturing production engineering at Derby University for the past 4 years whilst also working at Alpha as part of thee design team.

With her studies due to come to an end this year, Gemma has decided to take on a unique fundraising activity – The UNI Challenge. With no prior experience, she has committed to riding a Unicycle the entire combined length of both Alpha and Bri-Stor’s factory’s (around 600 meters.)

“I’m always up for a challenge and especially something funny or unique. It’s going to be a real challenge though as I’ve never ridden a Unicycle in my life. I think it will definitely make the end of my degree memorable and hopefully we’ll raise plenty of donations for Katharine House!”

The Katharine House Hospice was chosen as the Bri-Stor Group’s charity partner for 2020 following an employee nomination process. Based in nearby Stafford, they off crucial and valuable holistic care and support for people with advanced life-limited conditions.

Over the next 12 months, employees from across the Bri-Stor Group will be participating in a host of fundraising events, with all proceeds passed on to Katherine House.

Burgers all Round at the Annual Bri-Stor Group BBQ

It’s that time of year again where company Directors from across the Bri-Stor Group don their aprons and get behind the grill to flip burgers for every company employee.

The event, which takes place over three days, was conceived by Bri-Stor Group directors four years ago as a way of saying “thank you” and giving a little something back to employees for all their hard work throughout the year.

It has proved to be a great success and is now one of the most anticipated work days of the year across the group. Over 200 people will be fed during the course of the three days with Alpha Manufacturing, Bri-Stor Systems and Atlas Coatings employees each having their own BBQ day. 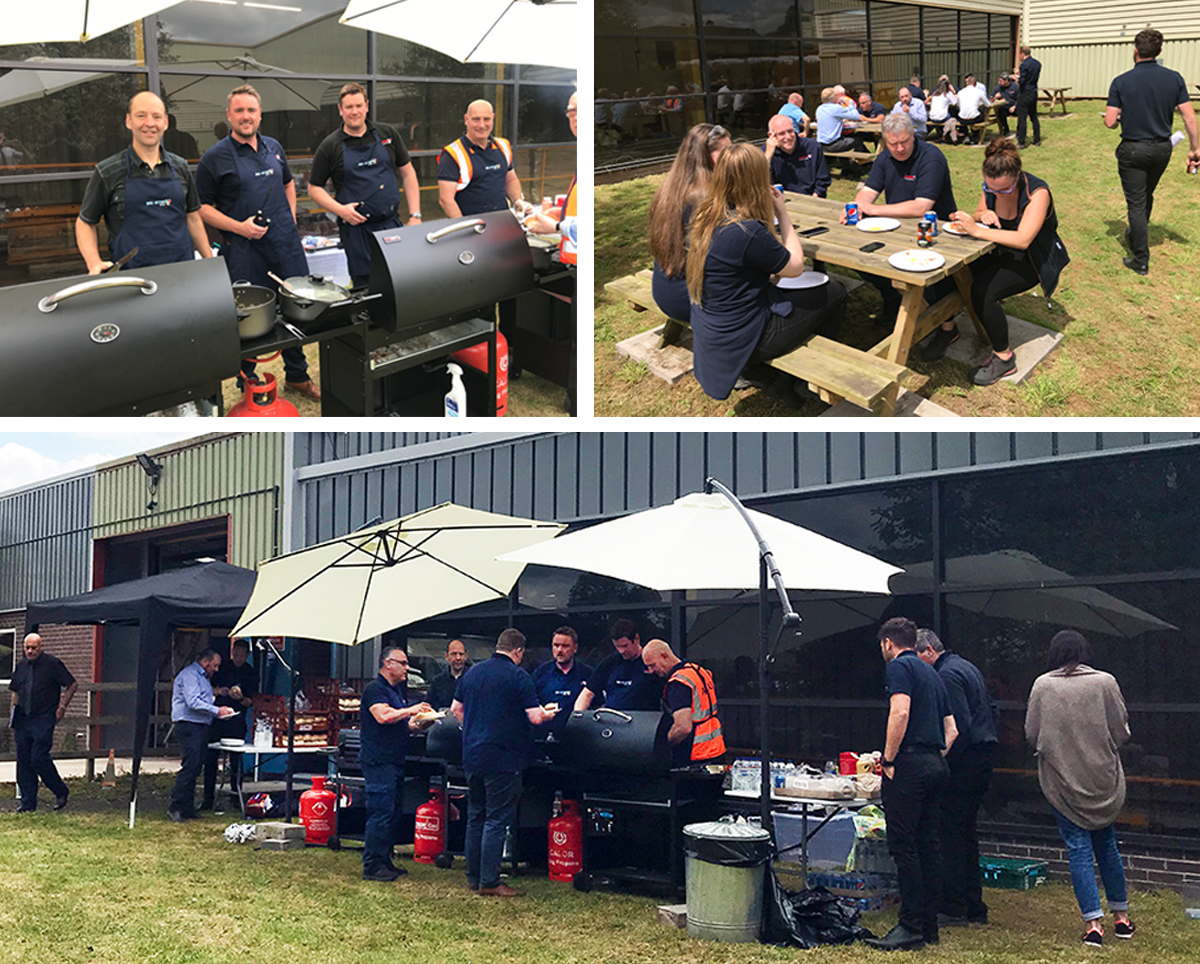 Congratulations to the Bri-Stor Group first year apprentices on finishing 1st in the junior category of the recent Stone festival Soapbox Derby.

For the third consecutive year, apprentices from both Alpha Manufacturing and Bri-Stor Systems competed in the local event, having designed and built their own racers. Two teams competed in the race but for the first time, teams were mixed from the two sister companies.

On a rainy day in nearby Stone town centre, a timber pirate ship and Only Fools and Horses inspired Robin Reliant lined up at the start line. Although both finished the course in good times, it was the bright yellow Trotters Trading racer that took first place with the fastest downhill time and even managed to catch some serious air over the ramp obstacle.

The Stone Festival and Soapbox Derby have become an important part of our apprenticeship first year program, with the young engineers working in teams to design, build and test their racers. With the entire Alpha and Bri-Stor manufacturing facilities at their disposal, they’re able to test their engineering skills and gain a solid understanding of various manufacturing processes.

Congratulations to both teams on their Soapbox racers and thanks to all involved in organising the Stone Festival.