In total, around 60 visitors came to have a look around Alpha and Bri-Stor’s facilities and see what the Bri-Stor Group apprenticeship programme has to offer. They were also given a presentation by group apprentice manager Will Davies-Hill before taking a guided tour of both factories. Current and former apprentices were on hand throughout the evening to answer any questions and offer insight into their experiences with the company.

On display during the evening were several examples of Bri-Stor Systems products and Van conversions, Alpha manufactured products and creations of apprentice projects, including the ever-popular Caterham race car. Following the open evening, applications for the apprenticeship preprogramme have been trickling in in and we look forward to welcoming potential candidates for interviews in the near future.

This year’s apprenticeship open evening will be held on Thursday 13th Feb 5.30 -7.30 at the Bri-Stor Group manufacturing facilities in Hixon.

The ever-popular event offers young people interested in an engineering career the opportunity to discover what vocational options are available to them. In attendance will be current and former apprentices from both Alpha Manufacturing and Bri-Stor Systems, team managers and even company Directors to answer any questions on the night.

The evening will begin with a welcome by group apprentice manager William Davies-Hill before a full tour of Bri-Stor and Alpha facilities. This gives the young visitors and their parents the chance to see first hand the processes that take place, the machinery employed and the facilities as a whole. Following the tour, visitors are invited to attend a Q&A session where they can discuss in more depth the options available to them after school.

Many of Bri-Stor Group’s current and former apprentices visited the open evening before deciding to take an apprenticeship at either Alpha or Bri-Stor. They discuss this and much more about their experiences in the video below. Gemma Smith was one such apprentice, she discusses her reasons for choosing an apprenticeship over other options.

“The reason I chose to do an apprenticeship over University was more of the fact that it’s more practice. I’m more of a practical person anyway so the thought of being able to do actual work and get training at the same time was kind of like a no-brainer and I think it’s a no brainer for anyone who wants to work in engineering, or business or anything really.”

If you’re interested in a career in engineering, or even if you’re not sure what you’d like to do following school, simply register here and come along to our open evening at 5.30 on Thursday 13th Feb and see what a Bri-Stor Group apprenticeship has to offer!

Alpha Apprentices on the Road for 2020 Recruitment Drive

Current apprentices from Alpha Manufacturing and Bri-Stor Systems have begun the process of recruiting the next generation of young engineers to join the apprenticeship in 2020.

The 1st year apprentices will be accompanying apprenticeship manager Will Davies Hill as he visits various local schools to introduce them to the Bri-Stor Group. Presenting to year 11 students, they will discuss their experiences during their first year, covering training, projects, events and their studies so far.

This gives students who may currently be considering their post-high school options a unique insight into life at Alpha from an apprentice’s perspective. It also clearly shows the path for career progression with examples of past apprentices who now have important full-time roles within the business.

Over the next few months, Will and his young colleagues will visit as many of the local schools as possible, encouraging students to visit the annual apprentice open evening in February and to apply once applications open in the new year. 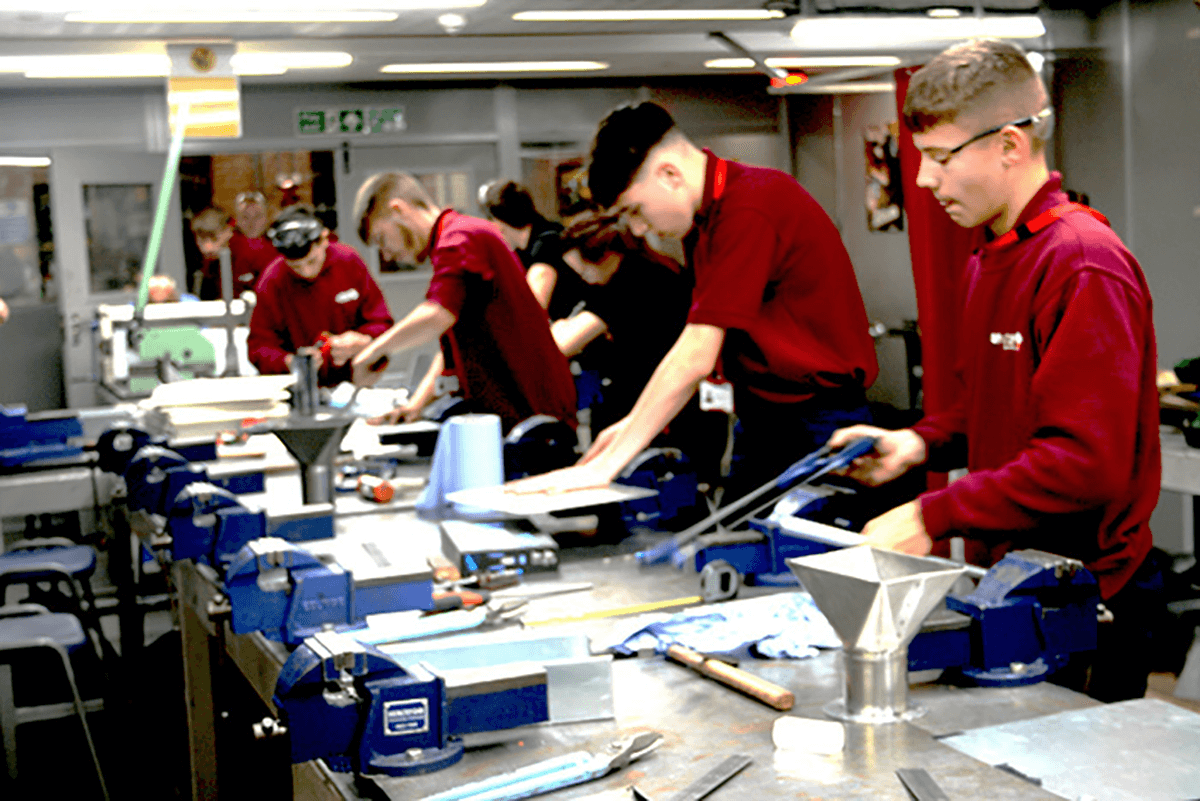 The next intake of Bri-Stor Group Apprentices were on site last week to complete their induction day ahead of their official commencement of studies in September.

The young engineers spent the day familiarising themselves with the Bri-Stor and Alpha facilities and apprenticeship programme in general. Having received their PPE and work equipment, they were given a full guided tour of the site by group apprenticeship manager Will Davies-Hill.

They were also given their induction packs and a breakdown of all the upcoming events and activities that they can expect in their first year, including a week long team building trip to Elan Valley in Wales, as well as the annual Soapbox derby project and other charity events.

The group now have a few weeks to prepare for the beginning of their course, before the official start date of 2nd September.