2019 marks a major milestone in the history of Alpha Manufacturing as the precision sheet metal fabricator enters its 30th year in business. 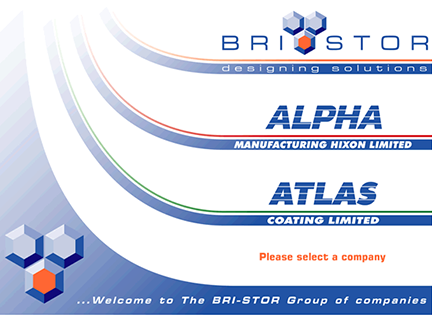 Alpha was founded back in September 1989, initially to supply sheet metal components used by sister company Bri-Stor Systems in their commercial vehicle conversions. Today, Alpha is a thriving business in its own right, employing around 150 people and boasting some of the most cutting-edge manufacturing facilities in the UK. Although still producing 100% of Bri-Stors sheet metal products, Alpha is now also sub-contract partners with a wide number of manufacturing companies covering a range of sectors.

Back in 1989, directors of Bri-Stor Systems recognised an opportunity to bring their manufacturing requirements in house, as opposed to sub-contracting their sheet metal supply, hence Alpha Manufacturing was born. Originally based at Hixon Airfield, Alpha offered CNC punching, laser cutting, folding, and welding, all of which had previously been outsourced. Powder coating services were also made available via sister company Atlas Coatings, which operated from the same site. Alongside Alpha and Bri-Stor, Atlas became the third and final component of what is now known as the Bri-Stor Group.

During 2000, it was decided that a new leader was needed for the Bri-Stor Group to consolidate and expand upon its successes to that point. In September of that year, Andrew Humphrey was appointed Group Managing Director, bringing a new sense of direction and drive to the group as a whole. This also strengthened the ethos of collaboration and mutual support between the sister companies, which would be crucial to their individual growth over the coming years.

Having outgrown the original site by 2006, Alpha relocated to its current home, just down the road on Pasturefields Lane in Hixon, on a 35-acre site alongside Bri-Stor Systems and Atlas Coatings. The move allowed the company to expand its operations and take its first steps on a journey towards factory automation. A journey which over time, has gathered momentum and taken Alpha to where its stands today as one of the most technologically advanced sheet metal fabricators in the UK.

One of those early steps involved the installation of a brand new, fully automated powder coating plant, capable of 24/7 lights-out operation. Utilising an innovative 5 stage pre-treatment Oxsilan process, Alpha were now able to offer not only one of the highest quality powder-coat finishes available but also one of the most ecologically friendly. In addition to the new powder coating facility, a new Pullmax 720 CNC punch machine and Bystronic fibre laser cutter were added to the existing plant list, which was transferred over from the Airfield site. Two brand new Mazak CNC machining centres were purchased, allowing the company to also offer precision 3-axis turning and machining for the first time. This increased capacity allowed Alpha to target new sub-contract customers across a number of sectors including automotive, electronics, agriculture, retail, construction and many more.

In 2015, an ambitious 5-year strategy was set out with the goal of doubling Alpha’s turnover to £20 million by 2020. To achieve this, a plan for strategic investment was also outlined to elevate Alpha’s manufacturing facilities to industry leading standards. To date, this plan has seen over £3 million invested in cutting edge automated machinery, including the TruBend Cell 7000 robotic folder, Salvagnini P4 lean panel bender, two TruPunch 5000 machines, a TruLaser 3030 fibre laser cutter and the STOPA automated storage system, with work on an extension to this due to begin early in 2020.

As a result, 2018 was a record year for Alpha Manufacturing both in terms of production volume and turnover, with various major long-term contracts secured, which promised an even more successful 2019 and beyond. Alpha’s ever improving level of capabilities and skill set has seen different types of contracts won recently, with much more complex fabrications and assemblies being produced by Alpha today than ever before.

By the end of 2018, it was decided that a Managing Director was needed to further capitalise on Alpha’s success and growth over the previous 5 years. At the start of 2019 Paul Clews was promoted from his role as Operations Director, having been a driving force in implementing the 5-year plan set out in 2015 and influencing much of the company’s recent successes. Andrew Humphrey retained his position as Group Managing Director, overseeing the Bri-Stor Group as a whole, while Simon Webb became Bri-Stor Managing Director.

2019 has continued in the same vein, with a strong orderbook and various exciting new opportunities on the horizon. Further investment has been made in developing a brand-new division of the factory, which will see the company diversify into stainless steel sheet metal fabrication for the first time. A completely new segregated manufacturing centre has been constructed, with full production due to begin by October 2019. This represents another major step for the company and an exciting opportunity to work within new markets.

From relatively humble beginnings back in 1989, the company is now an industry leader in its field, boasting some of the most advanced manufacturing facilities, combined with an expert experienced workforce. The future is now very bright for Alpha Manufacturing thanks to a strong commitment to delivering an industry leading sheet metal fabrication service. Consistent investment has equipped the company with cutting edge facilities, while development of its employees has ensured that the right people continue to drive its growth.